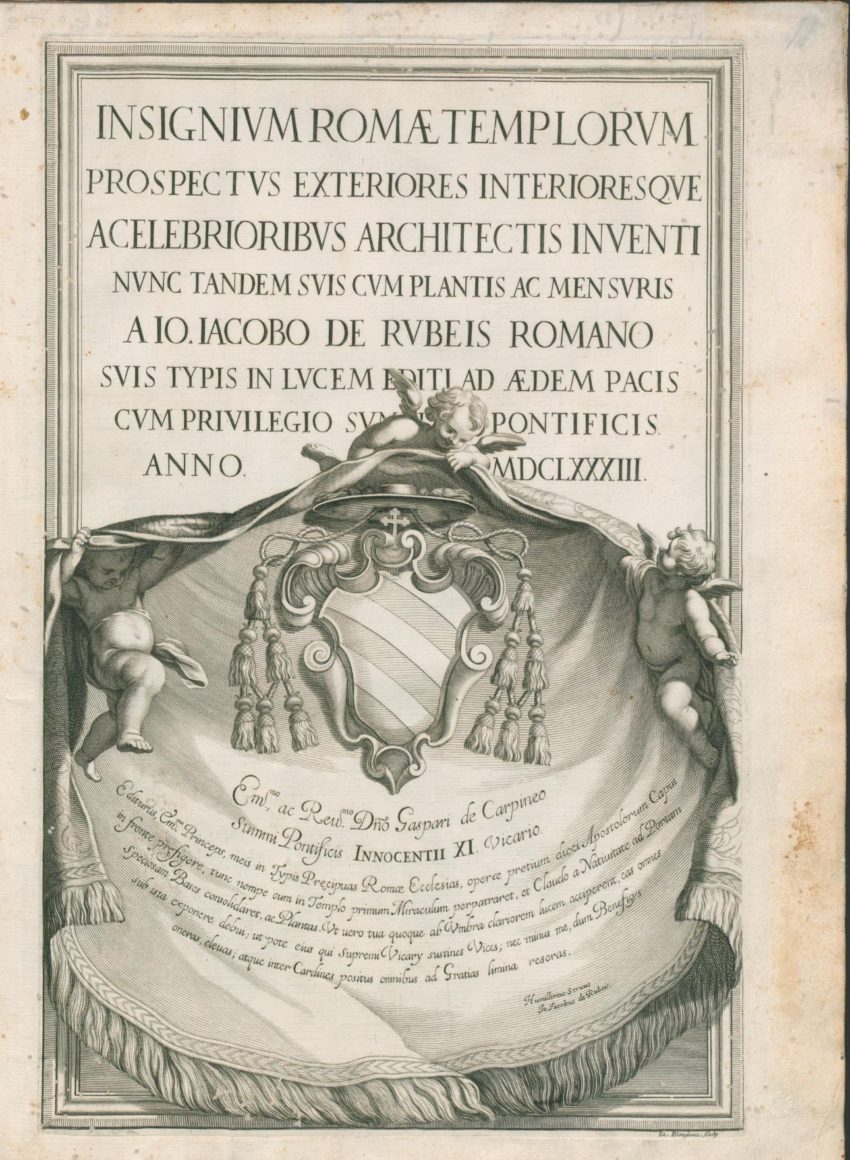 Publishing year and place: 1683 in Rome

To be found in ETH Bibliothek Zürich, Standort RA Rara

Pdf version of the book from eth e-raraDownload

This Page seems of great importance. It is right at the beginning and the focus of the picture is on people rather than on buildings. So, since in the picture everyone is focused on this man in the middle I am wondering if he is the one to which the book is dedicated or if he is a holy person. Both interpretations would emphasize the importance of the book right at the beginning.

The book features in my understanding Renaissance Architecture. This Groundfloor on page 36 stood out to me, because it looked like no other in the whole book. It is quiet interesting; There is a clear axial symmetry in the middle Room, yet when we look at the rooms at the edges the symmetry vanishes. Also the Wall on the left side is not straight at all, which is odd when you compare this floorplan to others featured in the same book.

This building seems to be a part of a series of simmilar buildings going from page 117 to 126. All of these buildings feature these very thin lines which seem to be in the background. Looked at it closely it seems that these lines are maybe how the building looked before someone remodeled it. With these what seem to be support arches it could have very well been a gothic church. The fact that these very narrow or thin collum like objects which have each a cross on top of it, are there aswell, the conclusion comes close that this building once was a gothic church which was remodeled in the Renaissance.

The Book mostly contains illustrations or floorplans of buildings with little to no text in it. Really stunning indeed is the level of detail shown in those illustrations. In a first step we will discuss where those details come into play and secondly, we follow up with a discussion why it could be of big importance to show such a high level of detail.

Since all Illustrations are (probably) showing real buildings, they had to be measured, which in turn is the first step to get details in. Exact measuring will result in detail. Thus, follows the conclusion that Rossi has spent a long time measuring each element until he was pleased with the level of detail. One such example of exceptional detail richness is on page 46, where every square in the upper part of the church is drawn with all its unique symbols. As well as all the sculptures, which in a sense are not easy to just measure out but are uniquely displayed with all their shapes. Further look at the roof which is shown in a section view. The supporting pilasters are not equally spaced out. As a matter of fact, they are in pairs of two with one group which contains just three pilasters next to each other. Now, even though the pilasters themselves are not a good example to show detail, the space between them is. By showing that those pilasters are not equally spaced out the author really makes a statement that he understood the structure and that he measured it with great skill. In conclusion we can see on many illustrations, but especially on page 46, that the author included much detail into his drawings, with the symbols, with the sculptures and with the space between the pilasters.

Now, why would one go through the trouble to show such a level of detail? One possible thesis to this question could be the following: The author wanted to show the greatness of architecture at its time and by including the details he expected a recipient to understand why these buildings are of great value. This could be combined with the fact that the catholic church, in the 16th cent., was very eager to show its wealth as a part of the counterreformation. Thus, it would be very likely that a cardinal or even the pope gave the task to Rossi to illustrate the great catholic churches of Rome to show off. A second answer could be that Rossi wanted to display his skill to get further contracts or gain in status. Both answers are likely and there could be more intentions as well. What would you think?