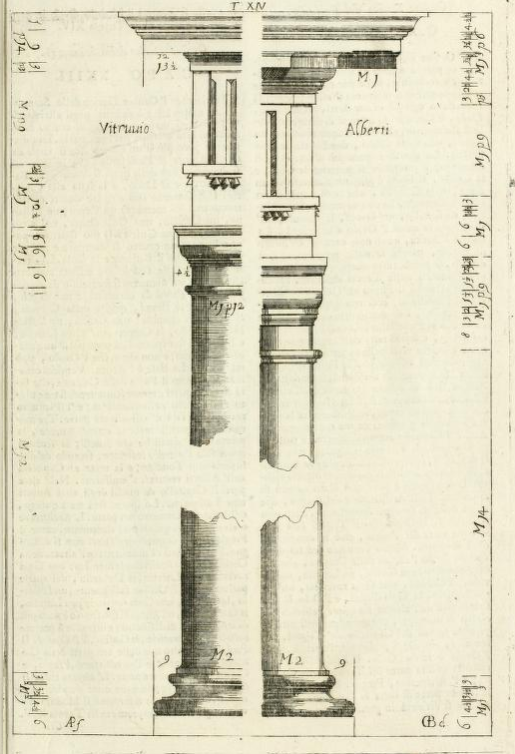 The book of Pompei discusses the five orders of the civil architecture. It can be looked at as divided in more or less than three parts.

1.The orders in general

First in the book the five orders are listed in a way the so that the reader can get an impression of what kind of orders the author is talking about.

These kinds of styles were called the five orders of the architecture and they have been used threw a certain time in history of architecture (still used but not in a regular context). The orders were applied to the so-called ornaments, which are named in the first part of the book called -Le cinque ordini in generale-.

The author has gathered information about famous Italian authors. By writing down their history Pompei also tells us in which state the architecture was when the authors were living.

It is a short summary which helps us to understand his concepts which will follow in number three of our self-claimed parts.

Now that we have a dare knowledge about the orders, and authors who are using them, Pompei underlines the concept of the book by comparing  the orders and their expressions threw the authors notes himself. The concept I mean is proportion. The orders are clarified in this part and they are illustrated threw the ornaments designed by the authors. Even though the different orders are categorized, so that it s clear how they look, they seem to have a slightly different appearance.  So it comes that we see a pillar with its ionic capital designed by Palladio next to one designed by Scamozzi. The style is the same only the proportions are slightly different. The way Pompei chose to introduce the authores, where they came from, who they were related to and what kind of life they had, gives us a possibility to look at their own interpretation of the ornaments, classified by the different orders. Pompei chose the way of a personal approached analyzation. That leads us to a way of guessing and playful analyzation, by comparing historical characters and building practice.

As said Vitruvius, the architect must have knowledge about the past, to be able to tell what raison d etre the ornaments have. Even if we can t analyze every little detail threw a personal historical context, it is a way to archive the different kind of interpretations.