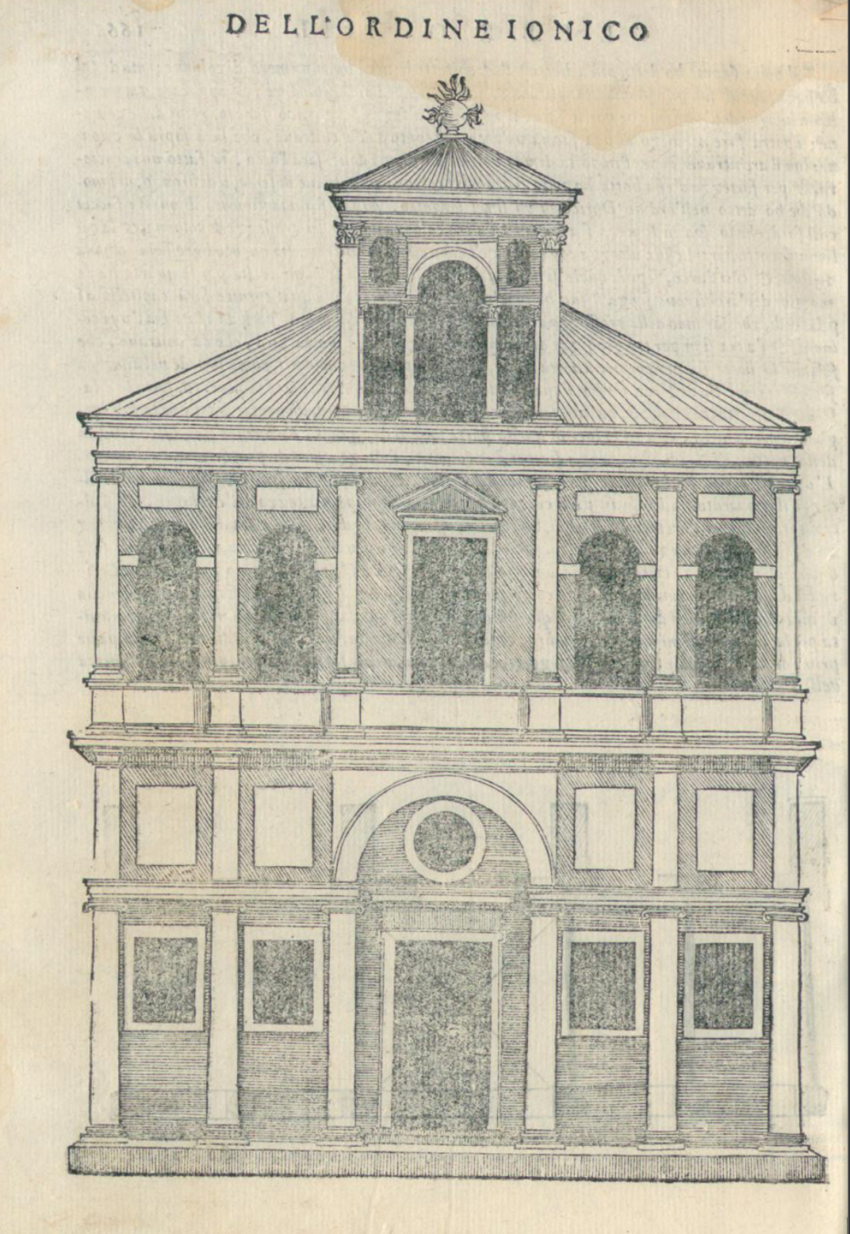 ”Tutte L’opere D’architettura Et Prospettiva” is a work composed of 8 books. This treatise on architecture written by Sebastiano Serlio is a work that will allow the reconditioning of architecture. Indeed, although the first book deals with principles such as geometry and mathematical foundations, it also allows one to get out of the rules and experiment with them.

While containing an analysis and visual representation of the different orders of antiquity, Serlio gives architecture a second wind by collecting in the sixth book fifty portals designs that play with the classical principles of architecture. He accompanies these ambiguous drawings with a didascalia. Serlio has a certain interest for the theatre. He often refers to it when talking about architecture. Architecture is the scenography of the world around us, a world full of interaction, exchange and expression. In his second book, he focuses on the prospective and the scenography. He analyses three types of scenes, namely the tragic, the comic and the satirical and illustrates them with architectural drawings to establish an interaction between the two arts.

Serlio turns architecture upside down by making it ambiguous. He invites mannerism into his work and plays with the boundary between Roman architecture and this new form of expression. Through his work, he lets us experience the mannerism without at least questioning the authority of Antiquity. The architect must renew himself and project a certain freedom, but he must not turn away from the principles of antiquity and disregard the conservation of these values.

Indeed, the order in which he has organized his book, starting with geometry, the foundations of mathematics and prospective and scenography, suggests that before playing with ancient principles and taking a certain freedom from them, one must be aware of them and master them.

In his treatise, he refers to Vitruvius as a reference but also to contemporary architects such as Peruzzi and Bramante. This book is accompanied by pictures so that the reader can also imbibe these images and keep them in his memory.

The third book deals with ancient Roman architecture and includes drawings by Bramante, Peruzzi and Raphael as well as the plan of the ‘’Tempietto of San Pietro’’ in Montorio, the emblematic work of the architect Bramante.

The fourth book is devoted to an in-depth study of the orders of architecture and their theory. This study is accompanied by some of Serlio’s own projects combining both the commitment to the Roman school and the Venetian tradition. These projects will influence the architectural development of the topology of the Venetian palaces.

In the fifth part Serlio devotes himself to an analysis of sacred temples, followed in the sixth book by civil architecture, collecting villas and palaces of illustrious and powerful men.

In this way, in Serlio’s research, one can find both the codification of rules as well as the possibility of transgressing them.