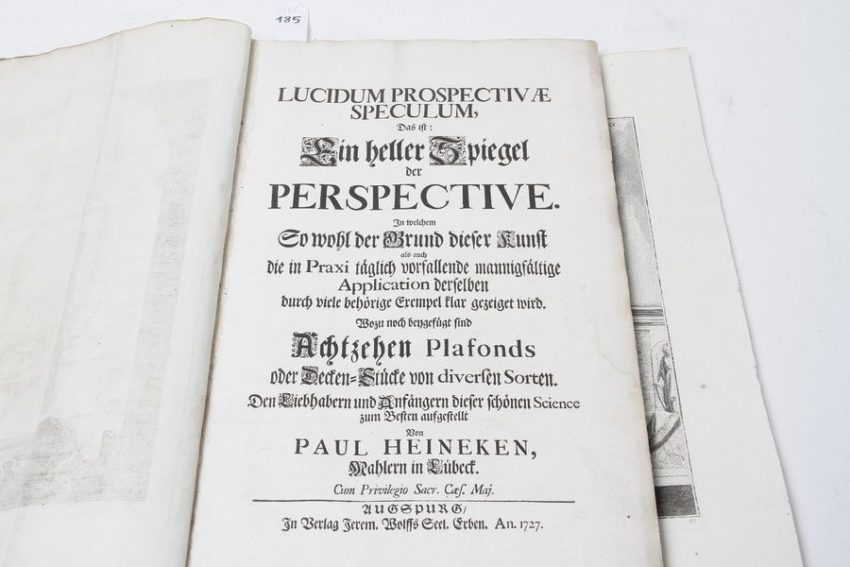 The concept of perspective is obvious. It is the underlying principle of the entire book. The first encounter with the word perspective, not counting the title, is in the introduction, where Heineken places perspective (as a technique) on the same level as other arts. He defines perspective, explains what it is and how it works. He then explains how the eye, the most important organ for perceiving three-dimensionality, works and how it is anatomically constructed.

Heineken describes that perspective, then also known as scenography, can be achieved by drawing visible objects on a flat surface as if the objects were far away and seen through a transparent surface. Although perspective is the main concept of the book, it is not always strictly followed. Limited by the means of printing and the (in)ability of depiction, a globe in wireframe style does not appear spherical, but rather elliptical.

The concept of perspective is important – not only in this book – to visualize and understand the multidimensionality of nature and all things in it. This means that to depict buildings and human art in general, you need not only talent (as in all arts), but also the right technique. After all, technique without talent equals talent without technique.

The objects drawn in perspective are not always figures from Heineken’s time, but ancient objects that have already been replaced by new inventions, or things that play no role in the explanation. Just to demonstrate how a stick casts its shadow on an inclined surface, he draws two sundials with lavish decorations.

Heineken does not explain how perspective works exactly, he only gives precise instructions how to solve a certain task, how to make a certain geometric figure visible in space. The book thus deals – in the first part in explanation, in the second part in illustration – with the well-known difficulties and problems of drawing and painting, and helps the reader by suggesting auxiliary constructions that make it easier to draw certain things.

Heineken’s book is not only a guide to correct perspective drawing, but also reading material on the architecture of his time and the time of the ancients. Many of the copperplate engravings printed in the book deal with well-known architectural structures from his era and the ones of the ancients. And like many before him, he analyzes, describes and draws the Vitruvian order in great detail.

What is rendered in our time still had to be drawn by hand in Heineken’s time. And this book certainly helped a lot to get the perspective details right.