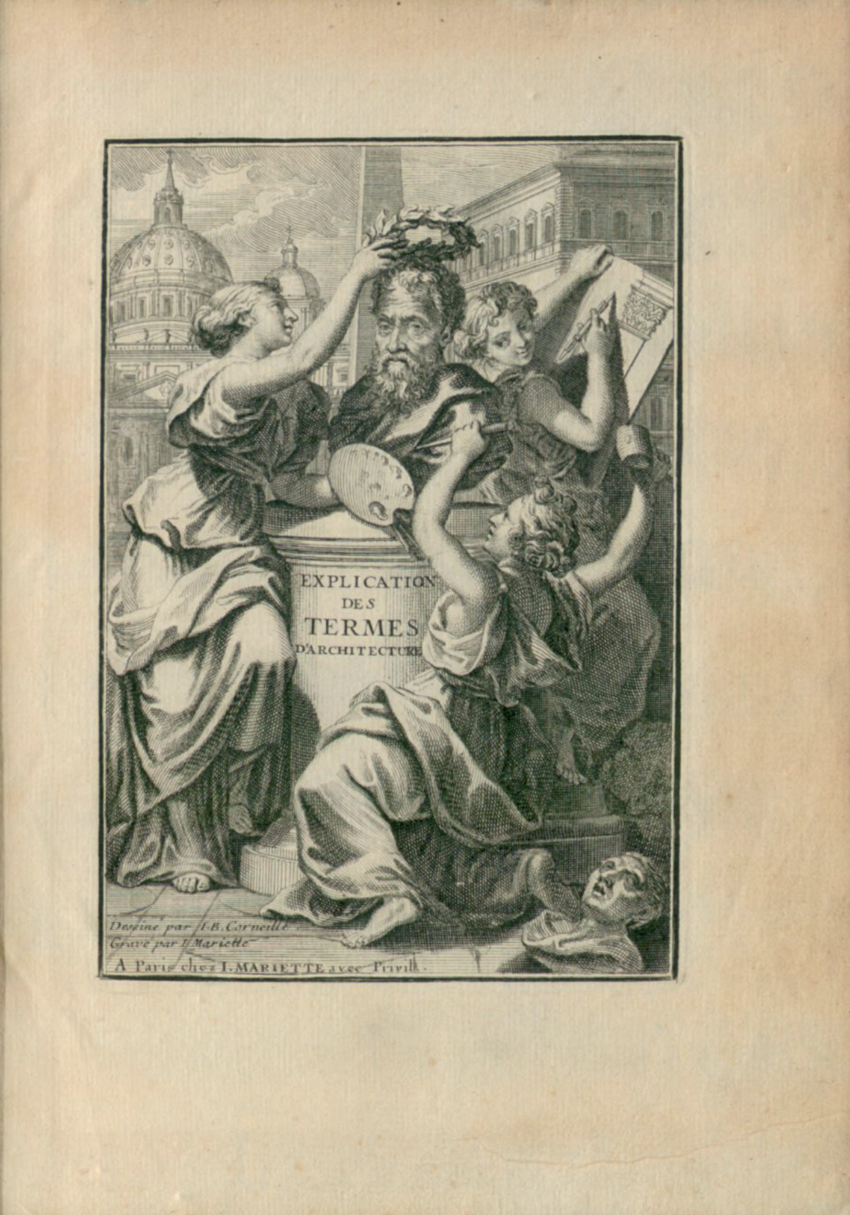 Alexandre Le Blond’s oeuvre “Explication des termes d’architecture” has one goal in particular: He wants to explain terms used and actions executed, when talking about the disciplines of architecture. Not only does he describe terms, that are used to talk about buildings themselves, but also the ones, that are connected to the construction and history of architecture.

The book is represented in the form of a dictionary. Aspects of explanation and therefore clarification are clearly represented in the choice of layout. Consequently the layout in its form is unmistakably clear and informative.
The main part of the book is neither overly decorated, nor does it display any illustrations. Hence the spotlight is directed on the unfolding and definition of expressions as the essence of the book.

Framing the text as the most important part of the book and leaving plenty of blank space additionally amplifies the importance of clarity and simplicity he wants to express.

While the words to be defined are written in capital letters, the phrases defining them are written regularly. The descriptive text is formated either in the regular style for the definition of the word itself or in italic for additional information such as page numbers for references in the book or etymological background in the greek and latin language.
The position of clarity is further readopted in the way the reader navigates through the book with the help of an order of letters, that indicates in which part of the book the reader is situated in.

Besides the very informative main part of the book, the title spread displays an illustration and a special arrangement of text. Pointed out as the first sets of pages, the title spread literally comes to the fore and thus has a special meaning for the context of the book. The illustration features Vitruvius as the admired, centralized statue, in the position of the teacher, who is getting crowned with a laurel wreath to symbolize a victory.
Since Gaius Iulius Caesar has been killed and therefore overthrown, his bust is symbolically situated on the floor. This depiction quite directly indicates the admiration for Vitruvius and the clarity in his theory of architecture.
An act of unification of the different methods to look at, talk about, design and also construct architecture is caught up in the title page’s illustration, as well as in the content of the book itself.

Le Blond wants to clarify terms and therefore unify the various disciplines and people architecture includes, by giving them a universal language they can communicate and express themselves with.