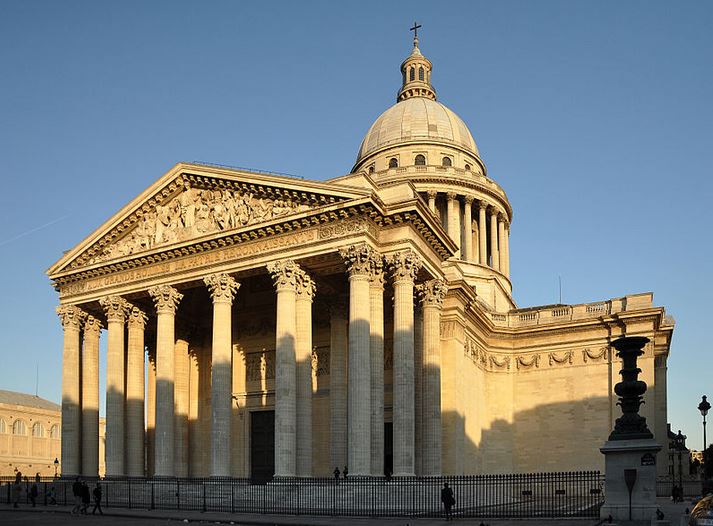 The full name of the book is “MÉMOIRE HISTORIQUE SUR LE DÔME DU PANTHÉON FRANCAIS” and as the title already states the entire book is about the history of The Panthéon in Paris which was built between 1758 and 1790. More precisely it is about the dome of the Panthéon.

The book is divided into 4 Parts. The first part contains the monuments history, while the second part is all about the historical detail and reasoning behind its construction. The third part is an examination on whether the walls supporting the dome have the necessary dimensions to withstand the forces they have to withstand. And the fourth and final part contains the exact details of the accidents which have occurred at the pillars of the dome, the causes of these accidents, and the various means proposed to repair them.
At the end of the book there are also some folded chalcography’s of the dome.

The author of the book is Jean-Baptiste Rondolet (1743-1829) was a French architect and theoretican. Rondelet worked on the construction of the Église de Sainte-Geneviève in Paris, today’s Panthéon. He first worked under Jacques-Germain Soufflot, and with his death in 1780, continued the construction work until its completion in 1790. In particular, he was responsible for the final construction of the dome and later repair work on the Pantheon between 1806 and 1812. Together with Emiland-Marie Gauthey, he investigated the structural damage that had occurred.

The book was released in 1797, which is 7 years after the building was completed and is a reflection of the construction of the dome and probably the basis for the repair work he was responsible for a few years later.